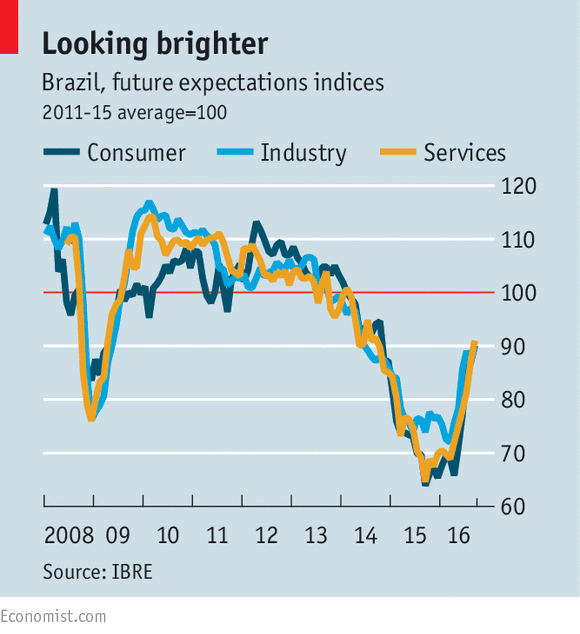 “BRAZIL is back in business,” proclaimed Abílio Diniz, chairman of BRF, a Brazilian pork and poultry giant, at a recent investor shindig. Really? The economy, mired in recession since mid-2014, is not expected to stir before the end of the year—and then only sluggishly. After rebounding in the first half of 2016, industrial production plummeted again in August. Retail sales fell by more than forecast. Firms expect to hire just 100,000 temporary workers in the run-up to Christmas, 3% fewer than last year’s already low tally. BRF’s own domestic operations are hardly a picture of health. Sales dropped by 5% in the second quarter, year on year (though this was offset by rising global revenues).

For all that, Mr Diniz is not alone in his optimism. Surveys point to rising confidence among bosses and consumers alike (see chart). Investors’ spirits are up—and with them the São Paulo stockmarket, which has returned to levels last seen in 2012. The real has strengthened by a third against the dollar since January.

The collective mood swing has less to do with the real economy, and more with realpolitik. In August the left-wing president, Dilma Rousseff, was impeached, ending months of uncertainty. Her pragmatic deputy, Michel Temer, will serve out the remaining 26 months off her term.

Brazil Inc wasn’t always anti-Rousseff. When she came to office in 2011 and lavished cheap credit and tax breaks on firms, bosses did not complain. They rebelled when her constant meddling first distorted, then crippled, the economy.

The Temer government looks both more fiscally responsible than its predecessor, and more responsive to businesses’ concerns. Bosses gush about easy access to ministers, even the president himself. They applaud the administration’s commitment to narrow the confidence-sapping budget deficit, which exploded to 10% of GDP on Ms Rousseff’s watch. Mr Diniz’s remarks came after Mr Temer’s proposed constitutional amendment to freeze government expenditures in real terms for 20 years handily cleared the first of four congressional votes. It passed the second on October 25th. A complementary reform to over-generous public pensions is in the works.

A promise of fiscal rectitude has helped dampen inflation expectations, allowing the central bank to cut interest rates for the first time in four years on October 19th, from 14.25% to 14%. Further cuts to Brazil’s high rates—the number-one bugbear of many a Brazilian boss—are expected. So too are other market-friendly measures, such as easing onerous local-content requirements for some industries and enlisting the private sector to build and run roads, ports and airports.

Some take matters into their own hands. Daimler, a German carmaker, teaches English to technicians so that they can read technical manuals. Fed up with waiting for Rio de Janeiro’s municipal government to build a promised access road to its research centre, General Electric paid for it to be paved. Singaporean shareholders of Aegea, a water utility, could not understand why a firm with revenues of 795m reais needed a private jet—until Hamilton Amadeo, its boss, showed them it was cheaper than relying on commercial flights and cars once the cost of executives’ lost time was added in.

Most companies cannot afford language classes, let alone jets. All abhor red tape. In the office of Guilherme Afif, chairman of SEBRAE, a group for small businesses, a printout of all the rules even tiny firms must obey takes up fully five metres of shelf space. The average Brazilian corporation spends 2,600 man-hours annually complying with the tax code, ten times the global figure (see article).

For decades, fixing these gripes has eluded even popular presidents. Mr Temer isn’t one, at least outside business circles. Some bosses urge him to undertake tough, early action. Others reckon that an all-out assault on workers’ rights or states’ tax-raising powers do not behove a president who lacks the legitimacy of an elected leader. Better to stick with emergency fiscal measures and leave deeper reforms to his successor. Many would be content with stop-gaps: a law to make outsourcing easier, say, rather than an overhaul of the sacrosanct labour code dating back to 1943.

In the meantime, euphoria over Ms Rousseff’s exit is tempered with caution. A tractor-maker in the southern state of Santa Catarina could use an extra 50 staff, its boss admits. But he is loth to hire, lest Mr Temer stumbles and confidence evaporates. “We are hoping for the best,” echoes the boss of a big education provider who has also ordered a hiring freeze. “But we are planning for the worst.”