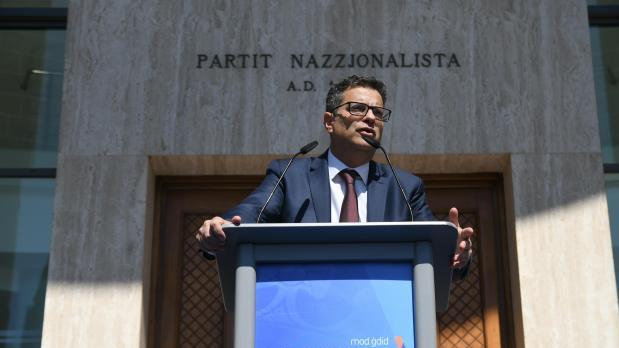 PN leadership candidate Adrian Delia has listed reforms he would like to see carried out in the law courts. Speaking at a press conference, he also hit out at the government for spending just 9 euro per year on training for each member of the police force.

Dr Delia, a practising lawyer, said the role of the Judicial Appointments Committee needed to be broadened so that it could consider all nominations for persons to serve in a judicial or quasi-judicial post.

He said a study needed to be carried out on whether a second law courts building should be set up, possibly outside Valletta, to work in parallel with the current building and allow space for the appointment of more judges.

The law courts, he added, should be administratively independent of the government and should no longer depend on government departments.

He felt that Malta should have more specialised courts, presided by judges who would have specialised in particular subject areas.

More judges and resources also needed to be allocated to the Family Court, where some cases were taking too long to be decided.

He said that reforms were needed in the appeals courts and consideration should be given to the appointment of a Supreme Court to consider cases of conflicting decisions on appeal.

Dr Delia also called for further modernisation of the legal aid office and a broadening of the competence of the Commissioners for Justice to hear administrative disputes.

When he spoke on home affairs, Dr Delia said it was ridiculous that this country spent just 9 euros per year on the training of each police officer.

He reiterated calls for the police to be handed overdue overtime payments.

Dr Delia said in reply to reporters’ questions that he was not against publication of his assets, although this was not required by party rules. However his assets first needed to be audited, and he was in contact with audit firms for the purpose. He said he had no hidden assets or overseas accounts.