Local digital content firms are claiming of unfair treatment compared to their foreign peers, with Vietnamese companies saying they face many regulations while firms like Google, Facebook and YouTube don’t pay taxes and are unhindered by regulations and policies. 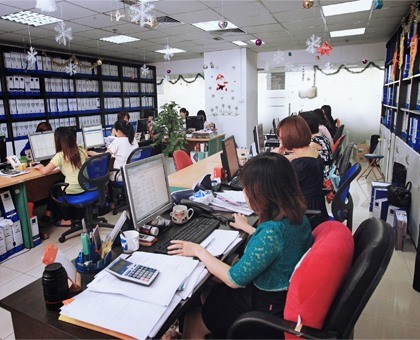 Employees at VCCorp, a local digital content firm based in ​Hanoi.

Leaders of digital content businesses made the gripes at a forum about the law on information and technology and development orientation held in Hanoi last week.

The revenue has risen due to the development of television, online services and the shift from traditional advertising to online ads and content on social networks.

However, he said 1 billion in revenue for the digital content sector was different than for the garment and textile industry.

He forecast that the digital content sector could bring benefits for Vietnam in tourism in the next five or 10 years, surpassing garment and textile and petroleum sectors while providing a million jobs.

Hung from VTC Intecom said there were some restrictions on domestic digital content development, as the Government imposed tight regulations on the sector.

He said his company was inspected by many management agencies when they made information websites. However, there was no one checking their company’s information which was posted on Facebook.

In addition, Vietnamese online game producers have to complete many administrative procedures.

Digital content has also shifted from PC to mobile, meaning management policies are no longer suitable with reality. Digital content on mobile is subject to both Vietnamese and foreign regulations, he said.

He added that this was why local digital content firms have not paid much attention to investment.

Agreeing, Nhan The Luan, a representative of Nhaccuatui, said Vietnamese businesses have faced competition from foreign firms while being restricted by regulations.

Luan said that total traffic of 300 licensed websites in Vietnam accounted for only 20 percent compared with foreign firms which have not been locally licensed.

Tan from VCCorp also said Vietnamese companies had to follow regulations and could be punished for violations while these are not applied on foreign firms.

He added that Vietnamese enterprises have to pay all kinds of taxes such as VAT, individual income tax and corporate income tax.

Tan said taxes should be imposed on both Vietnamese and foreign firms.

In addition, he asked the Ministry of Information and Communications to ask the Government to consider the digital content sector a key economic sector to not only maintain State budget collection but also attract foreign investment.

The ministry should also study policies to make foreign companies follow Vietnamese laws and regulations as they earn billions of VND from Vietnam without paying taxes and duties, he said.

He asked for administrative procedure simplification to reduce the burden on local companies.

Nguyen Xuan Cuong, vice chairman of Vietnam Digital Communications Association said laws and regulations should be adjusted to ensure fairness for both domestic and foreign businesses.