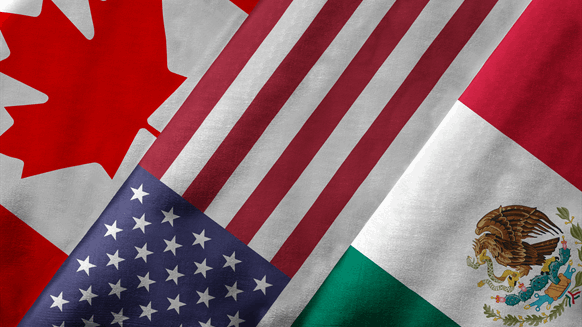 Energy companies that sat on the sidelines during other recent trade negotiations are getting more involved on Nafta.

(Bloomberg) — The Trump administration is easing environmental regulations and opening up territory for drilling as part of the president’s bid to unleash the “vast energy wealth” of the U.S. Yet Donald Trump’s push to rewrite the North American Free Trade Agreement could have the opposite effect.

As Nafta negotiations resume Friday, oil industry leaders are desperate to preserve the 23-year-old trade deal that drove a North American oil and gas renaissance and paved the way for $34 billion worth of energy exports to Canada and Mexico last year.

“Any changes that disrupt energy trade across our North American borders, reduce investment protection or revert to high tariffs and trade barriers that preceded NAFTA could put at risk the tens of millions of jobs,” said the top oil and gas trade groups from the U.S., Canada and Mexico in a joint position paper released last month.

Energy companies that sat on the sidelines during other recent trade negotiations are getting more involved on Nafta — securing formal roles on committees advising the process, unleashing lobbyists to influence it and outlining their priorities for the administration. Armed with a modest wish list, the industry is mostly in a defensive posture, terrified Trump will torpedo the current deal or weaken existing provisions that allow investors to sue countries over discrimination, seizures and other injustices.

“We want to make clear in a thoughtful way that there’s really no reason to disrupt the energy component of Nafta,” American Petroleum Institute President Jack Gerard said in an interview. “Over time, this has really evolved to a very efficient marketplace in North America with Canada, Mexico and the United States. It’s a mature system that’s well in place, and they’re just no reason to disrupt it.”

Trump has raised the possibility of an American exit from the deal at least three times since negotiations began last month.

“You may not necessarily be in the crosshairs, but if you don’t maintain a focus on it, you could be collateral damage,” Stephen Comstock, the American Petroleum Institute’s director of tax and accounting policy, said in an interview.

When Nafta was signed almost a quarter-century ago, the U.S. was importing roughly half of its daily oil and petroleum needs. Canada’s oil sands — now churning out 2.4 million barrels of crude a day — were just getting started. And Mexico still had a monopoly on its own energy development, blocking foreign businesses from drilling or processing oil in the country.

“Oil and gas has grown from an incidental discussion point to an enormous target of opportunity,” said Kevin Book, managing director of ClearView Energy Partners LLC. “Because energy is such a big deal in North America — a lot’s changed, not just in the U.S. but with Canada’s oil sands as well as Mexico’s reforms — energy could become an important hostage to the negotiations.”

Nafta facilitates duty-free trade of gasoline and other energy products. It also serves as the legal pathway for rising gas sales to Mexico — 4 billion cubic feet a day last year, or about 60 percent of U.S. natural gas exports. Because Mexico is a free-trade partner, natural gas exports to the country qualify for liberalized treatment under a U.S. law.

So far, North American oil and gas groups are collaborating, linked arm in arm as they advocate the same broad portfolio of changes. One possible exception: efforts by U.S. oil and gas interests to ensure any new trade agreement locks in recent reforms opening up Mexico’s energy market for foreign investment.

U.S. companies are increasingly intertwining their operations with activity on both sides of the border.

Chevron Corp., which has a representative cleared to serve on an energy-focused committee of Nafta advisers, stressed in comments filed with the federal government that its supply chain extends across North America. Chevron relies on manufacturers in all three countries to provide equipment, parts, repair services and chemicals.

WHAT DO YOU THINK?

Generated by readers, the comments included herein do not reflect the views and opinions of Rigzone. All comments are subject to editorial review. Off-topic, inappropriate or insulting comments will be removed.