Donald Trump’s pick for health secretary, Alex Azar, was previously an executive at a pharmaceutical company that repeatedly raised the prices of its drugs and tripled the cost of its top-selling insulin over the five years he served as a company president, it has emerged.

Mr Trump announced his choice on Monday, tweeting that Mr Azar would be a “star for better healthcare and lower drug prices”.

He would succeed Tom Price, who resigned in September after allegedly using private and government planes at the expense of taxpayers.

The nomination has sparked criticism, however, over Mr Azar’s own track record at Eli Lilly, a pharmaceuticals giant that was one of several to repeatedly increased the price of insulin, a life-saving drug used to treat diabetes.

Happy to announce, I am nominating Alex Azar to be the next HHS Secretary. He will be a star for better healthcare and lower drug prices!

Mr Azar worked as HHS deputy secretary under President George W Bush from 2005 to 2007 before joining drugmaker Eli Lilly as a senior vice president of corporate affairs and communications, according to his LinkedIn profile.

He served as a high-ranking executive at the company for ten years, becoming the president of Lilly USA in 2009, and was with the company as it tripled the price of its insulin product, Humalog.

The Trump Organization is worth one tenth of value previously reported 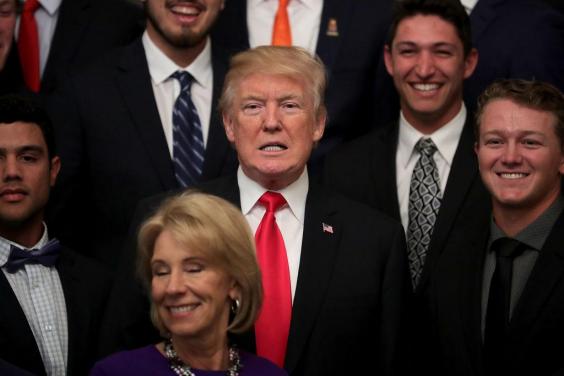 “We need an HHS secretary who will take on the drug industry’s greed, not someone who has financially benefited from it.”

Democrat Senator Jeff Merkley was also critical of the nomination, tweeting: “If my priority were bringing down RX prices, I probably wouldn’t tap a pharmaceutical industry exec accused of colluding to drive up the cost of insulin.”

Mr Azar’s nomination is unusual because HHS secretaries have previously come from the ranks of elected officials, such as governors, or top executive branch managers, rather than coming from the industry meant to be regulated by the department.

Trump has his own awkward water bottle moment

“The Obamacare system has made it impossible to predict risk.” The HHS secretary nominee added: “There’s actually fairly few levers that the government can do at this point to stabilise this broken system.”

Protect Our Care campaign director Brad Woodhouse also criticised the nomination, writing in a statement: “President Trump has nominated in Mr Azar someone who shares his misguided and factually flawed views on the Affordable Care Act.

“Mr Azar, a drug industry lobbyist, has been a harsh critic of the ACA and has gone so far as to say the law is ‘circling the drain’ despite evidence to the contrary.

“In fact, the ACA is working despite President Trump and former HHS Secretary Tom Price’s repeated efforts to repeal and sabotage it – open enrolment is off to a strong start, plans remain affordable and every county in the country is covered.”

“The nomination of a new HHS Secretary could be an opportunity for Trump and Republicans to turn the page on their repeal and sabotage agenda,” Mr Woodhouse said.

“Sadly, we know President Trump will never turn the page, and in Mr Azar, he appears to be looking for a willing partner in his spiteful ongoing campaign to deny affordable health care to millions of Americans.”

Before Mr Azar can take up the role as HHS secretary, his nomination must be approved by the Republican-controlled US Senate.

The Independent has reached out to Mr Azar and Eli Lilly for comment.