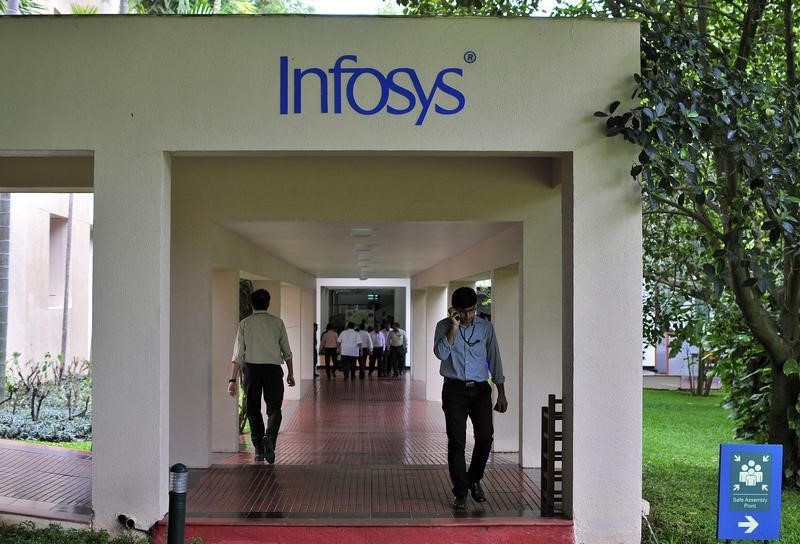 © Reuters. Employees walk along a corridor in the Infosys campus in Bangalore

By Tommy Wilkes and Manoj Kumar

Modi made a shake-up of India’s labor market a part of his reform agenda after coming into office in 2014, but opposition from unions and a bruising battle to pass other crucial pieces of economic legislation have stalled those efforts.

Shankar Aggarwal, the ministry secretary, told Reuters that the government felt the time was right to prioritize labor reform again after parliament in August passed India’s biggest overhaul of indirect taxes, the Goods and Services Tax (GST), a victory for Modi’s bid to boost the economy.

“We have to tweak the law. Employers want flexibility in hiring,” Aggarwal said in an interview.

Two key bills, covering industrial relations and wages, would be sent to the cabinet this month, he said. Subject to cabinet approval, the bills would be presented in parliament’s next session, beginning in November.

A rule requiring firms to seek rarely granted government permission for laying off large numbers of workers, which employers say has discouraged permanent hiring and kept factories small, are among restrictions to be loosened.

“It is a question of priority. We thought that it will be a good idea to put GST first so that we don’t fritter away our energy,” Aggarwal said.

Trade unions argue that the reforms will put jobs at risk and make it tougher for employees to form unions or strike. More than a million workers went on strike on Sept. 2 to protest against the policies.

Under the reforms, 44 labor laws, some of them dating back to the end of British rule and as anachronistic as providing spittoons in the work place, will be grouped into four new labor codes.

Bills on social security and working conditions remain under discussion with states and trade unions.

India’s two-decade streak of fast economic expansion is often derided as “jobless growth” since the service sector-led model has been capital rather than labor intensive.

More than 200 million Indians will reach working age over the next two decades, and creating sufficient jobs for perhaps the largest youth bulge the world has ever seen is among the toughest challenges for the country.

In 2009, 84 percent of India’s manufacturers employed fewer than 50 workers, compared to 25 percent in China, according to a study by consultancy firm McKinsey.

Nine out of ten Indians are employed in the informal sector, where labor laws are rarely enforced.

Disclaimer: Fusion Media would like to remind you that the data contained in this website is not necessarily real-time nor accurate. All CFDs (stocks, indexes, futures) and Forex prices are not provided by exchanges but rather by market makers, and so prices may not be accurate and may differ from the actual market price, meaning prices are indicative and not appropriate for trading purposes. Therefore Fusion Media doesn`t bear any responsibility for any trading losses you might incur as a result of using this data .