The job market for solicitors at the nation’s leading law firms has strengthened and is growing at 5.3 per cent after faltering in the second half of last year.

The nation’s 40 leading firms have created the full-time equivalent of 352.5 new jobs for solicitors in the past 12 months.

This more than compensates for the six months to December when many firms were reluctant to hire and the number of non-partner fee earners fell 1 per cent — or the equivalent of 69.7 full-time jobs.

The fastest employment growth — in percentage terms — is taking place at a handful of small practices led by 17-partner Thynne + Macartney where the legal workforce grew by 60 per cent.

But in terms of the absolute number of new legal jobs created, Gilbert + Tobin was in front.

In the past 12 months, this firm has added the equivalent of 47.6 full-time jobs, just in front of Mills Oakley Lawyers which added 44.8 and HWL Ebsworth which added 37.6 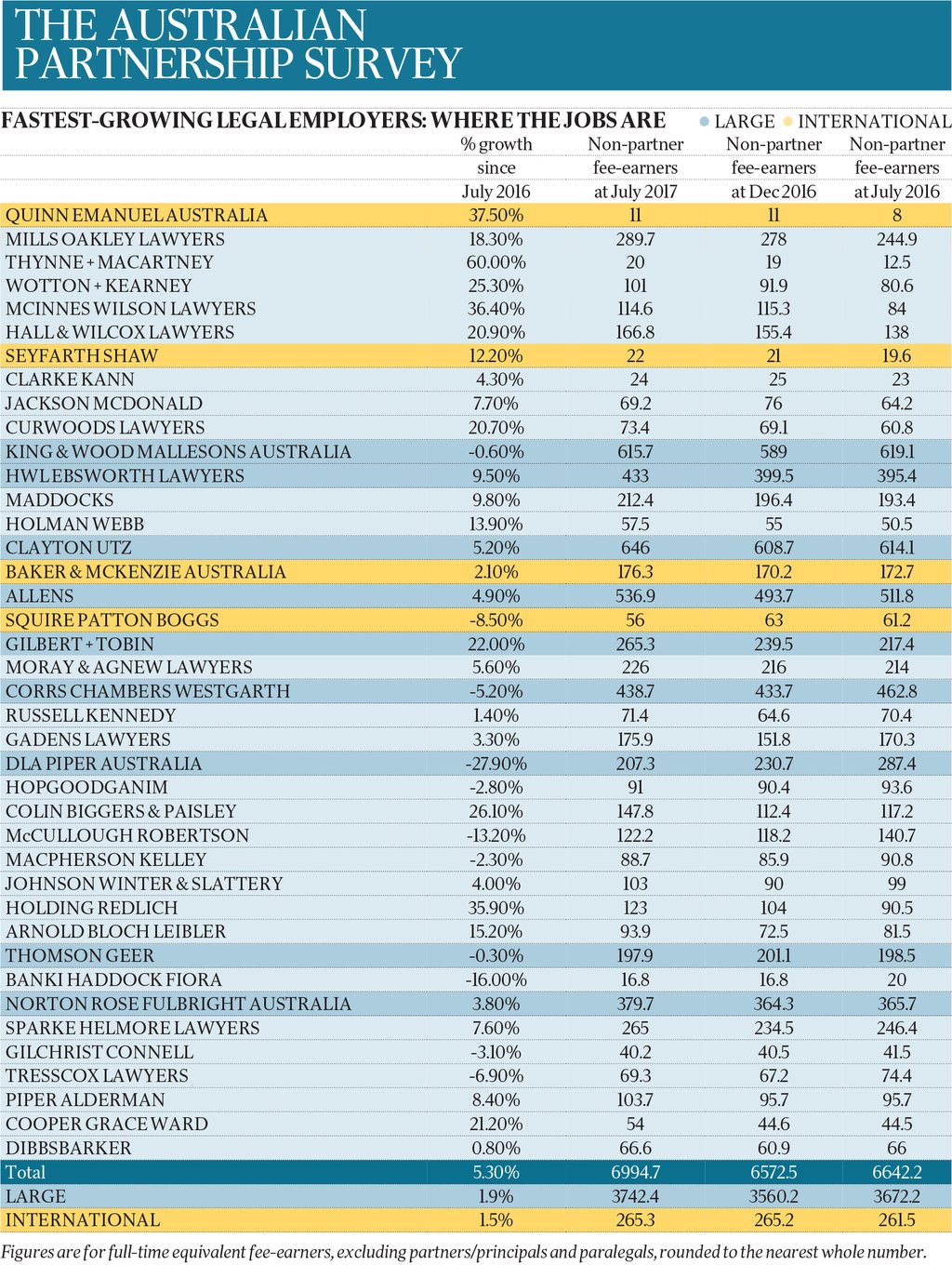 However, the 40 firms remained cautious about appointing partners, with the total growing by just 2.1 per cent — or the equivalent of 48.9 full-time partnerships — since this time last year.

In percentage terms, the fastest growing partnership was at Sparke Helmore (25.9 per cent), followed by the small Australian practice of international firm Quinn Emanuel (20 per cent) and Thynne + Macartney (14.9 per cent).

These are the key findings from the first tranche of The Australian Partnership Survey, conducted by Eaton Capital Partners. 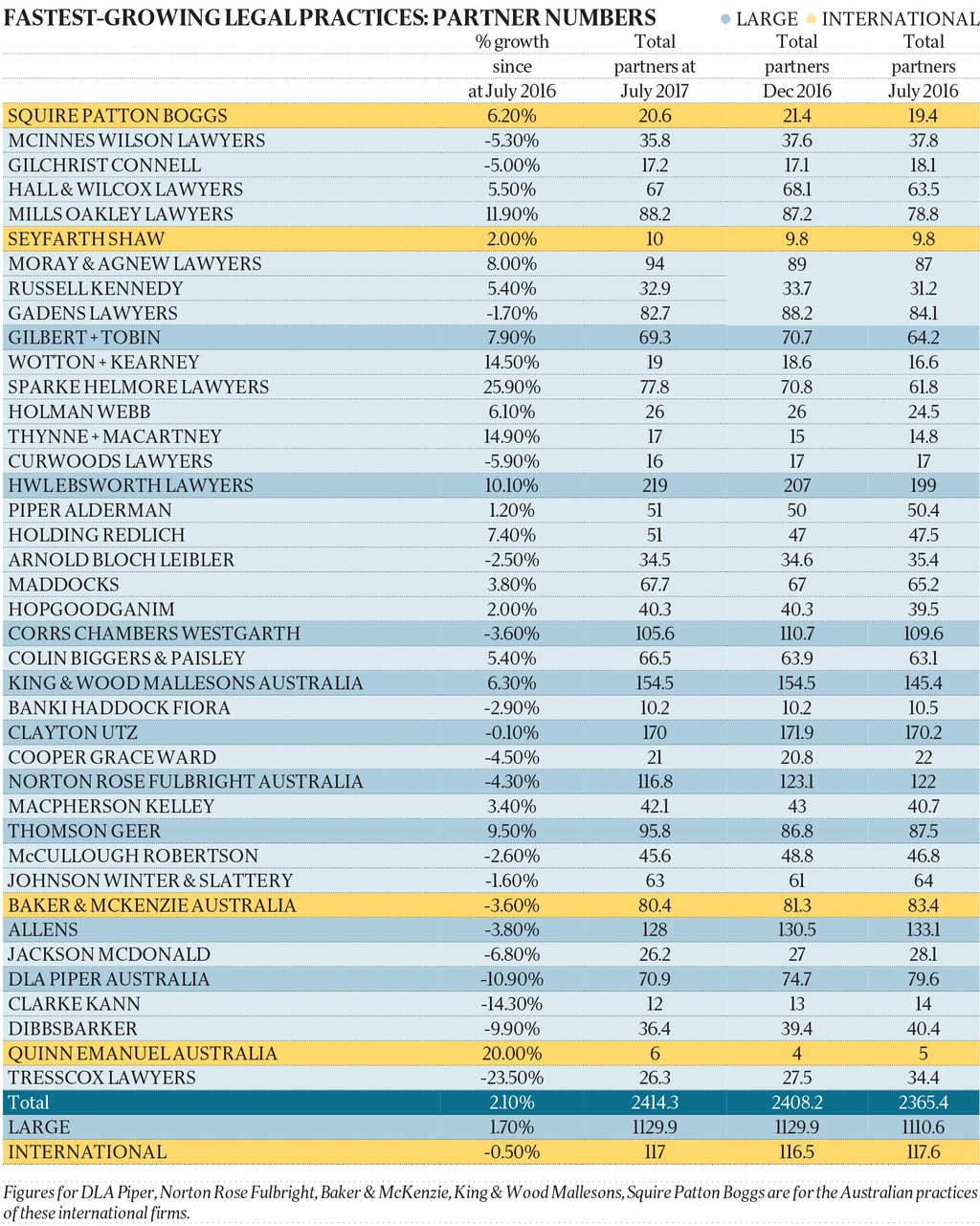 Other findings, which will appear next week, will identify those firms where women lawyers are being promoted to partnership in the greatest numbers.

Danny Gilbert, a co-founder of Gilbert + Tobin, said the growth in the legal workforce at his firm was linked to it reputation and standing.

“We are attracting a lot of work — more than our share of the ­market if you base that share on some per-partner proportional basis,” Mr Gilbert said.

He believed this had been due to what he described as “a relentless determination” to attract the best partners.

This was now “absolutely paying off, in terms of revenue, profit and headcount”, Mr Gilbert said.

At Holding Redlich, where the legal workforce grew by 35.9 per cent, national managing partner Ian Robertson remained positive about the firm’s prospects.

“We think there are good opportunities for a medium-size ­national law firm to do well provided we are client-focused and constantly seeking to improve our ­efficiency,” Mr Robertson said.

At McInnes Wilson Lawyers, where the legal workforce grew by 36.4 per cent, chief executive Paul Tully said some of this was attributable to last year’s merger with the Canberra office of Dibbs Barker. McInnes Wilson had also opened offices in Adelaide and Melbourne.

David Kearney, who is Wotton + Kearney’s chief executive partner, said the 25.3 per cent increase in his firm’s legal workforce was attributable to its “boutique strategy” and global alliance.

By specialising in insurance work “the talent market knows we stand for something” and this meant the firm was able to attract the best insurance lawyers.

Internationally, Wotton + Kear­ney has an alliance with firms in the US, Britain and Germany that had enabled it to better service clients and post lawyers internationally. 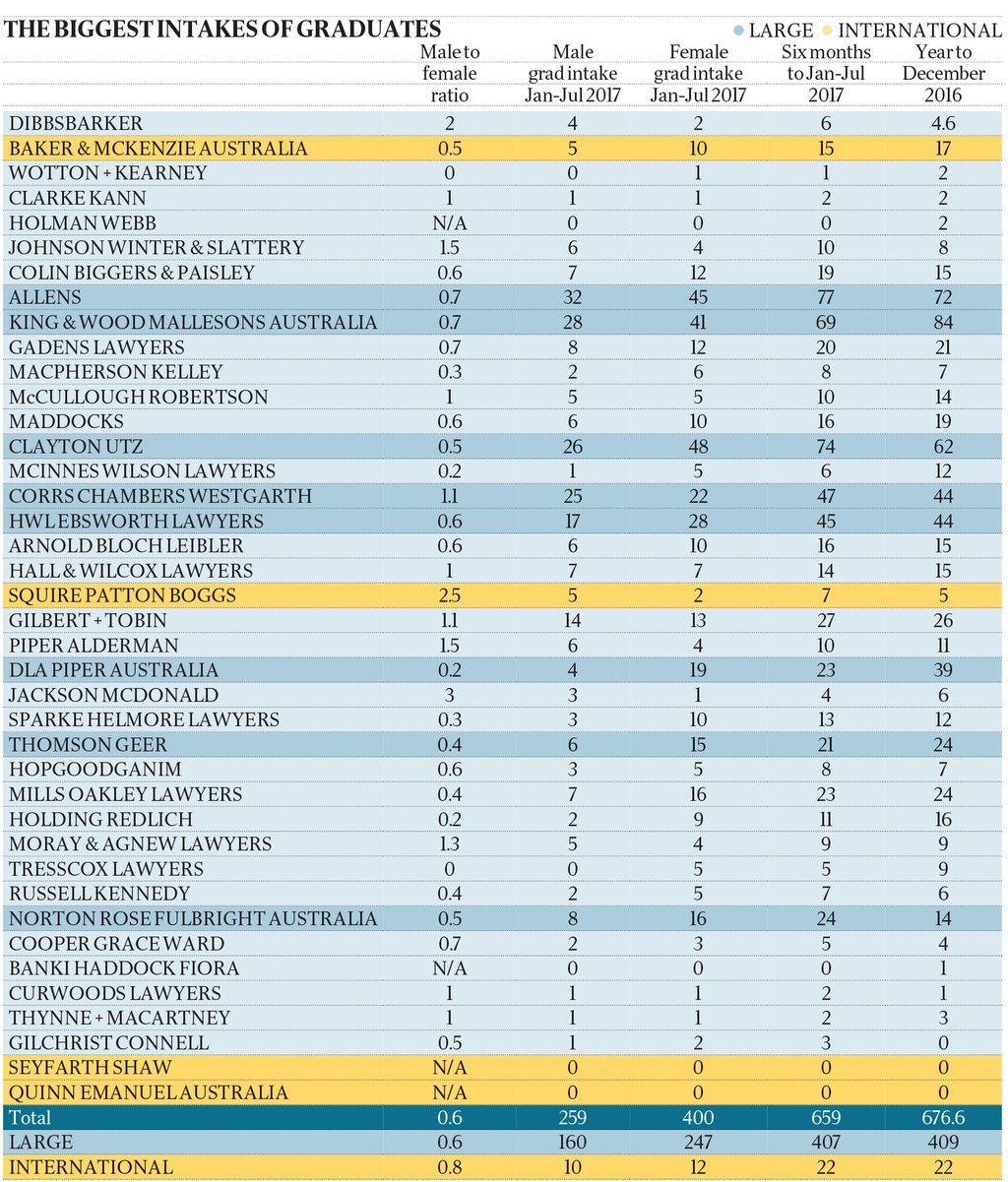