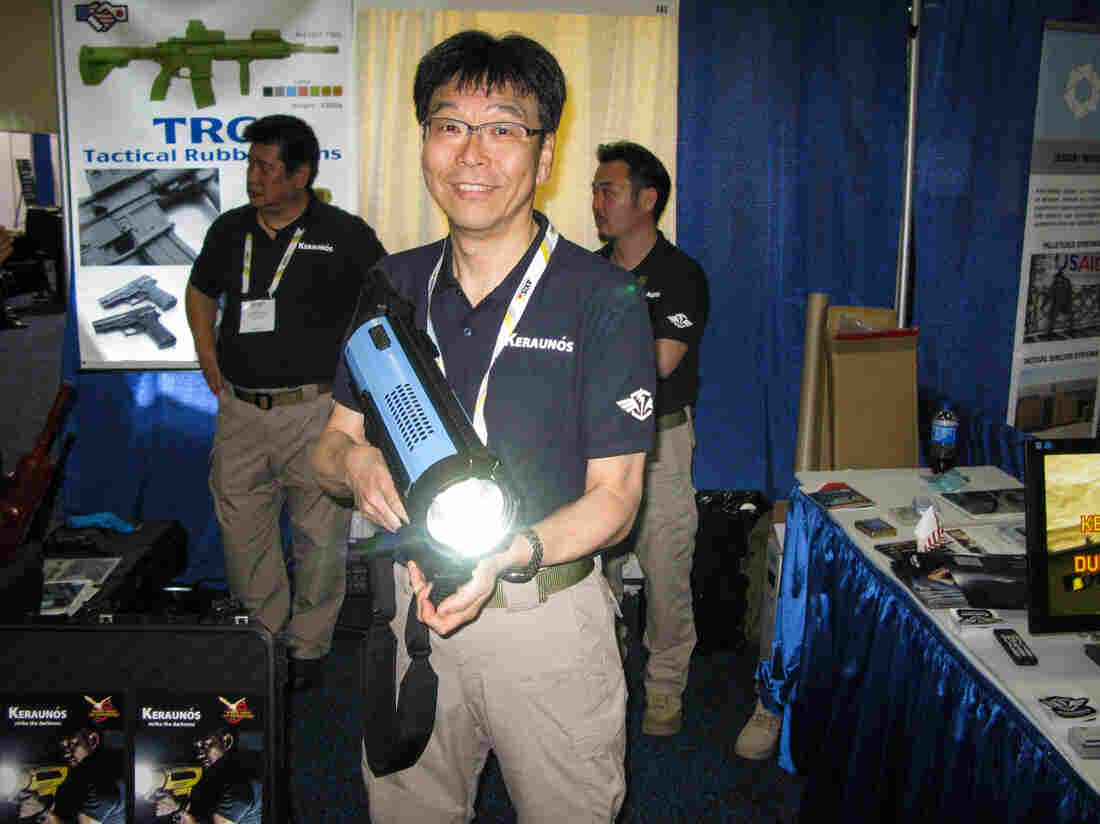 Hiro Yazawa of Japan Cell displays a spotlight weapon that sells for $5,000 at the Border Security Expo in San Antonio on Tuesday.

There’s a lot of excitement at the Border Security Expo in San Antonio, where vendors schmooze with government buyers and peddle their wares.

This year, the White House is asking Congress for billions of dollars for border security, and it could include thousands of new federal agents, many miles of a formidable wall and the latest surveillance and reconnaissance technology. And the vendors here in the exhibition hall at the Henry B. Gonzalez Convention Center are ready.

The Homeland Security Department is already the largest federal law enforcement agency with the biggest budget, and it may get even bigger. With that in mind, booths here are packed with cameras mounted on telescoping poles, facial recognition and biometric software, vehicle scanners, license plate readers and lots of drones.

Unmanned Systems and Solutions, in Hinsdale, Ill., sells heavy-lift (up to 30 pounds) unmanned aerial vehicles that get their power from a tethered cord instead of in-flight batteries.

“We had plans to come to the expo before the presidential election, but we definitely came when this administration came into office,” says Pete Dwyer, a partner in the company.

At the expo, merchants are showing off rubber guns, real guns and a peculiar, sci-fi-looking spotlight gun.

We had plans to come to the expo before the presidential election, but we definitely came when this administration came into office.

“It’s for border control, for searching for people, and … also for blinding eyes,” says Hiro Yazawa, representing the Tokyo-based manufacturer, Japan Cell. The spotlight weapon — priced at $5,000 — has had a hard time finding U.S. customers, though Yazawa says the Japanese military uses them.

The largest item is a mammoth, $750,000, camo-colored truck and trailer that sleeps 33; it’s for deployment in remote areas. Mike Pine of CT Defense says he wants to sell the trucks to the Border Patrol. Trump’s focus on Southwest border defense got his attention and this is his first time at the expo.

“We’ve got another 5,000 [Border Patrol] agents that are coming on board,” Pine says. “The question is how will they deploy these agents to the front lines? … Today, the agency is using trailers and shipping containers.”

For a reality check, there are certainly “bad hombres” crossing illegally into the country, as the president claims. But most unauthorized immigrants are men looking for work in jobs like landscaping crews or Central American mothers with small children in tow seeking asylum. Nevertheless, the booths at the expo bristle with military-style tactical gear. 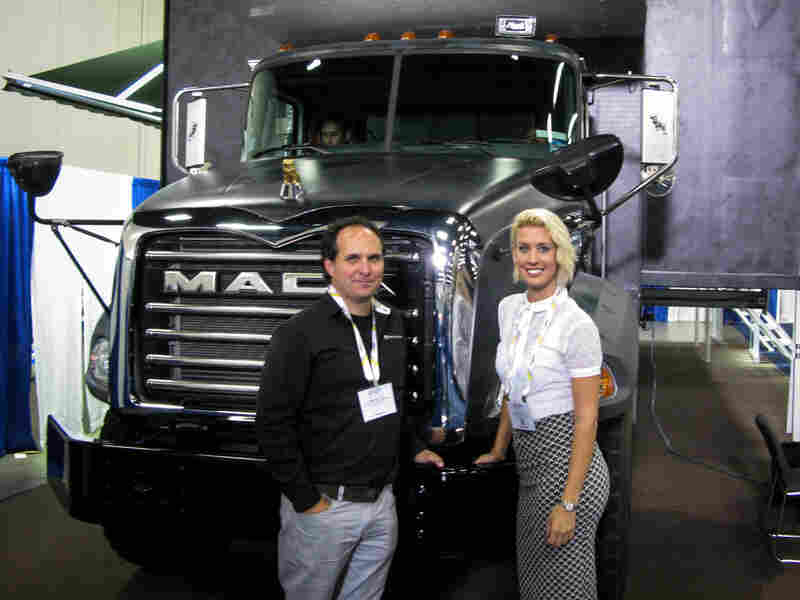 Mike Pine and Denise Germann of CT Defense at the expo with a $750,000 mobile command post they hope to sell to the U.S. Border Patrol.

“We hope a bad guy shoots one of our remote-controlled mounted cameras instead of an agent,” says Dennis Smith, of AgileMesh Inc.

One of those looking to buy is Gabe Acosta, assistant chief patrol agent in Laredo, Texas. He is looking for new, high-tech law enforcement gear, and he says so far his favorite “is a certain night vision optic, which allows you to see color at night, versus your standard green screen.”

Walking around the exhibit hall, you realize this is not a conference for wall builders. In fact, Trump’s “big, beautiful wall” is not especially popular at the expo. Jay Ahern, former acting customs commissioner, called it “dumb physical infrastructure” during his panel at the gathering.

“While the wall gets a lot of play publicly,” Ahern said, “I think the technology piece will be critically important.”

Far from San Antonio, dozens of contractors are designing prototypes of a border wall, ranging from 18 to 30 feet high, that must withstand sledgehammers and blowtorches. But here at the expo, current and former Homeland Security officials are looking for a smart border that may depend more on computer screens than on steel and concrete.