But when Barnes’ law partner – Ross M. Cellino Jr. – tried to get his daughter, Jeanna Cellino, a job in the law firm after she graduated from University at Buffalo Law School in 2012, Stephen Barnes said no. According to sources close to the Cellino & Barnes law firm, Barnes told his partner he didn’t want “nepotism” in the firm.

The refusal to hire Jeanna Cellino, an honors graduate of UB’s Law School, upset Ross Cellino, and it caused more than two years of hard feelings between the two partners.

But that disagreement was not the reason why Cellino launched a lawsuit this week seeking to dissolve the high-profile law firm, two lawyers who are supporters of Ross Cellino told The Buffalo News on Friday.

“Ross filed the lawsuit because he was upset about the management and direction of the firm, and some aggressive business practices,” one of the Cellino supporters said.

The attorney said Cellino & Barnes for years has been trying to steal clients from other firms. That allegation was also made by another Buffalo lawyer who spoke to The News on Friday.

“Ross told Steve and others in the firm that he wanted them to back away from that, to stop doing it. He couldn’t stomach it anymore,” said the Cellino supporter, who spoke on the condition of anonymity.

That allegation was denied on Friday during a News interview with the law firm’s managing partner, Robert J. Schreck.

“We emphatically deny that we have ever had a policy of stealing clients,” Schreck said. “We’re an advertising law firm. Potential clients see our ads, and they come to us. We don’t go to them. Many times, people have come to us because they were unhappy with their current attorneys. We will evaluate the case for them. Plenty of times, we will tell them, ‘Your attorney is doing things properly, stay with them.’

“Sometimes, the client will hear our analysis and decide to make a change – either going with us or deciding to go with another law firm. This happens in the legal field. On rare occasions, clients leave us and go to other law firms.”

In 2003, Cattaraugus County Judge Larry M. Himelein fined a Cellino & Barnes attorney $10,000 after finding that the attorney made false statements in an effort to get a client to leave another Buffalo law firm and sign up with Cellino & Barnes.

“That happened 15 years ago,” the attorney involved is no longer with Cellino & Barnes, and the law firm would never sanction such conduct, Schreck said.

Schreck added that he is not aware of any crusade by Cellino to change the law firm’s policies on taking on clients who had been with other firms. “If he made statements to that effect, I did not hear them,” he said.

Schreck also addressed questions from The News involving Jeanna Cellino and the firm’s hiring of Stephen Barnes’ brother and girlfriend.

He said Jeanna Cellino – now a highly-respected trial attorney with another Buffalo law firm – had only recently graduated from law school when her father first suggested hiring her.

Schreck declined to discuss whether Cellino and Barnes – the law firm’s two founders – ever argued about Jeanna Cellino, but he discussed the hiring of Richard Barnes, who joined the firm in 2001, and Sturm, who was hired in 2009.

“Rich Barnes is a former assistant district attorney and he had 15 years of personal injury experience before he came here,” Schreck said. “He was a well-respected and well-liked attorney long before he came to Cellino & Barnes.”

“Ellen Sturm finished at the top of her class at UB Law School and was on the UB Law Review. She had worked for the Hodgson Russ law firm and had served as a confidential law clerk to Judge Eugene Pigott” in the state appeals court, Schreck said. “Any law firm in Buffalo would have hired her in a second.” 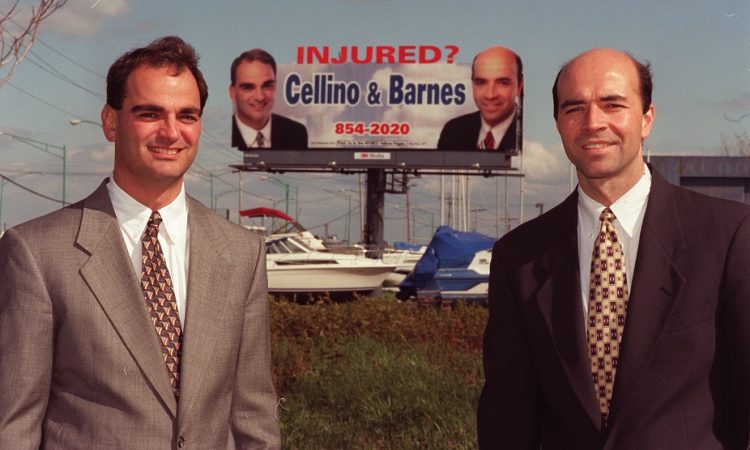 Did nepotism play a role in either of those hirings?

“They were hired because of their qualifications, which were excellent,” he said.

He also confirmed that two of Cellino’s relatives – his brother-in-law, Denis Bastible and his nephew, Christian Oliver – are attorneys at Cellino & Barnes.

“Yes, it is accurate that they work here, and they are both outstanding attorneys,” Schreck said.

According to sources close to the law firm, Ross Cellino also has a total of five daughters and sons who are lawyers, none of whom work at Cellino & Barnes. The sources said Ross Cellino, who has been unavailable for comment, has been at work in the firm’s Buffalo offices this week.

The News asked Schreck whether the office atmosphere has been awkward this week.

“I would just tell you that, for us, it is business as usual,” Schreck said. “Our clients and their cases are top priority. Our attorneys are working full speed ahead, 24-7, to serve them. None of that has been changed by a lawsuit.”

The lawsuit filed by Cellino has shocked attorneys in the legal community, who said it is highly unusual for an attorney to file such a legal action against his own law firm – especially one that he co-founded. Cellino and Barnes have hired two legal heavyweights – Terrence M. Connors for Cellino, and Gregory P. Photiadis for Barnes.

Attorneys Christopher J. O’Brien and William F. Savino said they hope everyone involved keeps in mind that the clients – not the battling millionaire attorneys – should remain top priority.

“I am sure that a lot of their clients are worried and wondering what is going to happen. But I am also sure that the judge in this case will make sure that the clients are properly served, no matter what happens with the lawsuit,” Savino said.

State Supreme Court Judge Deborah A. Chimes, who took the unusual action of sealing court papers in the case, has scheduled court proceedings for May 19. Her office declined to comment when a News reporter asked for an explanation of why the case has been sealed. Other state court officials said they do not know the reason for the secrecy.

“It is very unusual,” said Savino, a business attorney for 42 years. “I’ve rarely seen court papers sealed in a case like this.”

Schreck and Connors both said they could not discuss the allegations in the lawsuit, because the papers are sealed.

“What I can say is that there are no financial irregularities in this law firm, and I am unaware of any that have been alleged,” Schreck said.

So far, the two main participants – Barnes and Cellino – have been silent on the case.